It is that time of year again-we are seeing ticks already!  Any time the weather is above freezing for more than a few days in a row, ticks can emerge and start to wreak havoc.

Prevention is key for these diseases.  Topical monthly flea and tick preventatives such as Parastar Plus or Frontline Plus are recommended.  An alternative is Nexgard which is a monthly chewable preventative.

There is a vaccine available for Lyme disease as well.  Please discuss with your veterinarian if your pet is at risk and would benefit from this.  Lyme disease is endemic in this area (meaning it is prevalent here-see the map of human cases tracked by the CDC). 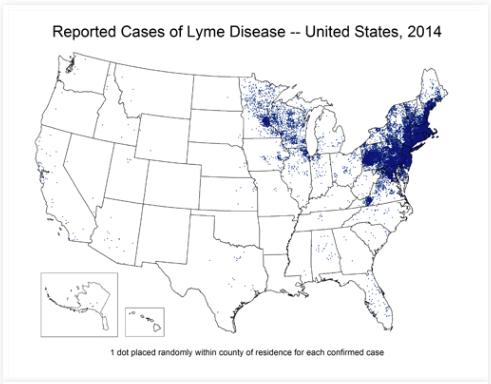 Thoroughly examining your pet after being outside, especially if in tall grasses or wooded areas can help find ticks before they attach as well.  Most of the tick borne illnesses need the tick to be attached for at least 24 hours in order to transmit diseases.  Catching them before they attach or get engorged will help prevent disease transmission.

If you have questions about tick borne illnesses, how to prevent them, or if you think your pet may have been exposed, please call us to discuss further!

Lyme disease, or Borrelia burgdorferi, is a common tick borne illness in the Northeastern United States.  It is carried by the deer tick, Ixodes scapularis.  An infected deer tick must bite an animal and attach itself for 24-48 hours in order to transmit Lyme disease, so finding unattached ticks or using a product that kills ticks within 24-48 hours should prevent infection. If an animal does become infected, it takes many weeks to months before signs become apparent.  Animals do not tend to get a target-like rash from the original tick bite like humans do.  When they do show signs, they are often nonspecific such as fever, inappetance, lethargy, limping, especially shifting leg lameness, and just not acting like themselves.  Often this is because of multiple joint arthritis, or joint inflammation and pain.  Since it can take months to see these signs, a bite in early spring before the first dose of tick preventative is applied is usually not noticed until the following fall.

If your pet is showing any of these signs, or is just not acting right, we may recommend performing tick borne illness testing such as the Idexx 4Dx Plus test.  This test looks at a number of common tick borne illnesses including Lyme disease, as well as Ehrlichia (canis and ewingii), and Anaplamsa (platys and phagocytophilum) which can produce similar symptoms in pets.   This test looks for antibodies to the Lyme organism.  Antibodies are produced by the body when it is exposed to an infectious agent, and can remain in the body for months to years.  This means that this test does not indicate an active infection, just that the pet has been exposed to Lyme disease at some point in the past.  However, since there can be serious side effects in rare cases that can cause kidney damage, most veterinarians will use a course of antibiotics to treat a positive result in a pet that is showing symptoms.

There is a vaccine available for Lyme disease.  This vaccine must be given before any exposure to Lyme disease however to be effective.  It should be started as a puppy or at the onset of a lifestyle change that would increase exposure in an adult dog, and must be given every year to keep immunity up.

Tick control is also a very important part of preventing Lyme disease.  Using a product that kills ticks before they have been attached for 24-48 hours is vital.  These monthly topical products should be started in spring once we have reached a temperature above freezing for more than 3 days in a row-this usually means March, and should be continued until we are not getting multiple days in a row that are above freezing-generally November in this area.  Examining your pet after excursions into the woods, brush, tall grass, or up to the cabin for any ticks is also recommended, but deer ticks are extremely small and can be easily missed, so prevention is key.

One last point to bring up is that pets cannot give people Lyme disease, but they can be reservoirs for it, so if a tick bites them and then either completes its life cycle and bites a human or produces eggs which are infected and one of the offspring bites a human, this human could get Lyme disease.

Talk to us today about Lyme disease and your pet.  We can help determine a good plan of prevention, whether that includes vaccination, or just flea and tick preventatives.  Also call us if your pet is showing any signs that may indicate tick borne illness so we can test and implement appropriate therapy as soon as possible.